This month, we’re grateful to share an insightful piece of writing about solidarity written by Residency artist Rimah Jabr. Rimah also shared some resources you can look through to learn more about and support Palestinians right now.

Take no one’s word for anything, including mine—but trust
your experience. Know whence you came. If you know whence
you came, there is really no limit to where you can go.
—James Baldwin, “My Dungeon Shook” (1963)

We as peoples must go to no limit in our fight against inequality, injustice, and Denialism.

I’ve never been to a demonstration before, as I never believed that the world cares about us. Last Saturday, I was at Nathan Phillips Square chanting “Free Palestine.” Why this time? Because this time, people on social media heard about Palestinian stories from the young activists, artists, LGBT fighters, freedom fighters and Youtubers.

I underestimated solidarity, but hearing people acknowledging what is happening to Palestinians gave me the solace and courage to think how vital it is for a child under attack to feel the world is watching, this will make them safe and not the desperate words of their helpless parents.

It’s time to question the traditional media and ask who is telling the story. In old American movies I watched as a kid, the bad guy was Indigenous, and the hero was the white American who saves the world. And here comes the role of art in fighting dehumanization.

Suppose you would consider criticizing the Israeli apartheid system as anti-Semitic. I would argue that this fear and silence is what permitted six million Jewish to be killed, Black people to still suffer discrimination until this very moment, and it’s the same silence that allowed the residential schools to remain open until the 90s.

Edward Said once said that Israel doesn’t want to acknowledge what happened to Palestinians because they don’t want to be held responsible for the crimes they committed against humanity. However, a few voices from the Israeli Jewish community were brave to say otherwise, like B’tselem, Breaking the Silence, Gideon Levi and Ameera Hass, as well as filmmakers and artists. You can see the stories of Palestinians in the Oscar-nominated Five Broken Cameras by Emad Burnat and Guy Davidi. Taha the story of Palestinian poet Taha Ali. On the side of the road, a documentary by Israeli/Canadian filmmaker Lia Tarachansky. The present, Oscar nominated short film by Farah Nabulsi. 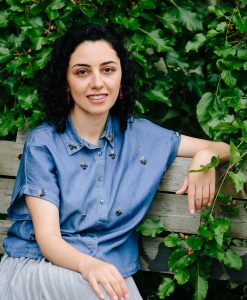 Rimah Jabr is a theatre director, playwright, screenwriter and Ph.D. student in Theatre and Performance Studies at York University. She completed a master’s degree in theatre-making from the RITCS in Brussel. She wrote and directed several plays, all produced in Belgium, Canada and Palestine. Rimah is an artist in Residency at The Theatre Centre. Since the pandemic, she’s practicing storytelling digitally. She’s made ‘This Gen podcast’ for Why Not Theatre and an audio drama,  This is Not What I want to tell you, for Kaai Theatre.